Is great art only found in art galleries? Are musicians only brilliant if we see them in expensive concert halls? Can we only appreciate Olympic class athletes at world class athletic events? Do we have to see great talent in a particular setting or location in order to recognize that just how amazing that person’s skills are? 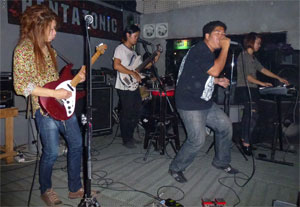 In a previous post I wrote about an amazing guitarist I stumbled upon in a grungy bar in Thailand. I saw him play for two nights and managed to record about 15 minutes of his guitar solos. You might not like guitar or the style of music he plays, but I think his video is worth watching. This particular guitarist has put in thousands and thousands of hours of practice to master his art. That deserves some respect and admiration.


Before you watch the video, please read these excerpts from a Washington Post experiment with one of the best concert musicians in the world.

The Busker with the $3.5 Million Dollar Violin

The Washington Post arranged for concert violinist Joshua Bell to play his multi-million dollar violin in a Washington, D.C. subway at morning rush hour “as a test of whether, in an incongruous context, ordinary people would recognize genius.” It is a fantastic article and definitely worth reading in it’s entirety, but here are some excerpts.

On Friday, January 12, the people waiting in the lottery line looking for a long shot would get a lucky break — a free, close-up ticket to a concert by one of the world’s most famous musicians — but only if they were of a mind to take note.
Bell decided to begin with “Chaconne” from Johann Sebastian Bach’s Partita No. 2 in D Minor. Bell calls it “not just one of the greatest pieces of music ever written, but one of the greatest achievements of any man in history. It’s a spiritually powerful piece, emotionally powerful, structurally perfect. Plus, it was written for a solo violin, so I won’t be cheating with some half-assed version.”

“It was the most astonishing thing I’ve ever seen in Washington,” Furukawa says. “Joshua Bell was standing there playing at rush hour, and people were not stopping, and not even looking, and some were flipping quarters at him! Quarters! I wouldn’t do that to anybody. I was thinking, Omigosh, what kind of a city do I live in that this could happen?”
If we can’t take the time out of our lives to stay a moment and listen to one of the best musicians on Earth play some of the best music ever written; if the surge of modern life so overpowers us that we are deaf and blind to something like that — then what else are we missing?

Here is the the video.

Is this guitarist anywhere as good as I think he is? Or am I clueless idealist that plays too much guitar? Please let me know in the comments.